"Tell Laura I Love Her," by Ray Peterson (1961)
Written by Jeff Barry and Ben Raleigh

The dead teenager genre was one of the go-to themes in the early years of rock. In tragedy after three-minute tragedy, singers told us of One True Loves who died young. By the way, this genre should be distinguished from simple thrill-seeking recklessness, i.e. those punks in "Dead Man's Curve," driving too fast on dangerous roads. No, the dead teenager genre was littered with victims. They died tragically because of poor driving conditions ("Last Kiss"), poor driving period ("Don't Worry Baby"), suicide ("Patches"), and the broken hearts, oh the broken hearts, behind the senseless acts.

A broken heart brings us to "Tell Laura I Love Her," Ray Peterson's story of Tommy, a boy determined to get the money to buy his girl a wedding ring. Possibly incapable of holding a job, trapped in a world without lottery tickets, Tommy has no choice but to do what any of us would do in his situation. He enters a small-town auto race.

In all the genre, three moments ring out with the hysteric sincerity found only in the teen soul:

• Peterson's chorus on "Tell Laura I Love Her." It's quite a feat of sustained emotion—he has to sing it three or four times, the last from beyond the grave.

In Britain, the record company cited the song's "tastelessness" and destroyed its copies of "Tell Laura I Love Her." But America likes its tragedy, especially when its sappy, and Peterson's oldies radio staple followed the even more painful-not-in-a-good-way "Teen Angel" into the Top Ten. In the future, dead teenager balladeer Dickie Lee added it as a deep cut to whatever LP included his hit "Patches." Those had to be cheery recording sessions.

Peterson went on to start his own label and scored another big hit with the Phil Spector production "Corrina, Corrina." On his way out of fame, he recorded "The Wonder of You," best remembered as big-selling Elvis schlock, before taking his four-octave voice first to the nightclubs and then to church as a minister.
Posted by KC45s 1 comment:
Email ThisBlogThis!Share to TwitterShare to FacebookShare to Pinterest 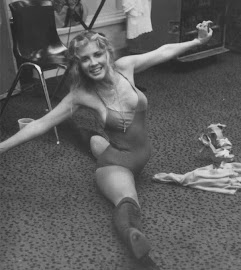 If There's Such a Thing As Love
Magnetic Fields